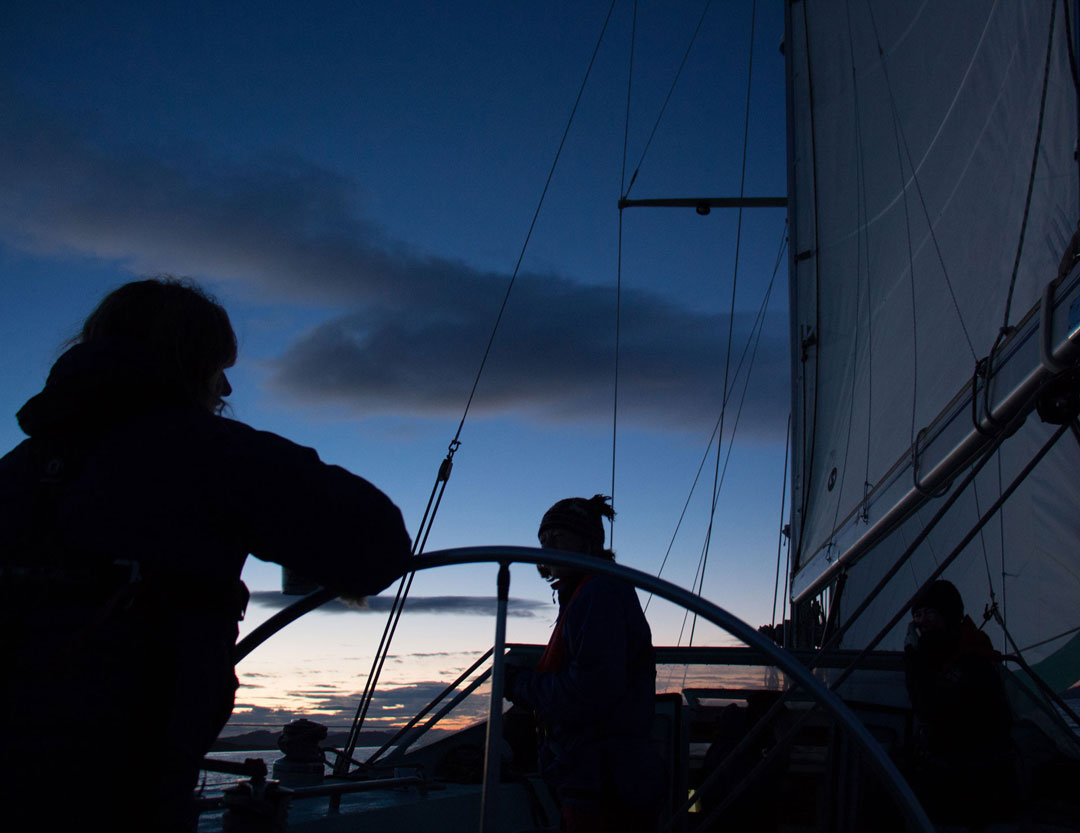 Selkie’s sailing season is over, brought to a dramatic close by the arrival of the first proper Atlantic storm of autumn: a deep weather system whose isobars run rings around a sea area stretching from the Azores to Svalbard.  It just keeps on coming… Monday… Tuesday… Wednesday… on Thursday a lull when I manage a quick dip in a peaty brown sea near Arisaig. Then back at it for Friday and Saturday… ferries cancelled up and down the coast and every skipper and crew holed up or battened down.

The VHF is finally off.  All summer long it crackles out weather reports every 3 hours. Up in Stornoway, the coast guard keeps time while the sailing yachts yaw and heel their way out of the rat race; their crews journeying by portal to the bedazzling world of Scotland’s treasured coastlines and creatures. At each broadcast, skippers wait at chart tables to hear if strong winds and gales are predicted and then plot their course to protected pools.

Gales do happen in the summer but not to the same ferocity, intensity or duration as their winter counterparts.  This summer more often than I care to write, I have heard Mayday calls being relayed by the coast guard. I have listened fearfully for the response, the call for assistance from any boats in the area, with an anxious heart, checked the position to see if Selkie is near.

Season feenee for us tourist boats, but not for the Mallaig lifeboat.  I check the RNLI website and no calls out since 1st October. The selfless volunteer crew have not headed through the waves in these horrific conditions, but they will, be it for a yacht, a fishing boat or an emergency on an island.

This is the fairytale land of well-known wizards and dragons, steam trains and magic, Outlandish stone circles, haunting fiddles and crooning bagpipes… that everyone wants a part of.  They pour from the station platform, cram into double lined parking spaces, eat fish and chips in fish-stock-crashing proportions. Yet some prescient souls arriving, turn their faces to look out, out to sea, for that is where the real magic is to be found.

Navigating these waters is not for the faint hearted. Among the headlands, islands, lochs and channels there is such a diversity of sailing and choice of shelter unmatched in the world. As long as the intrepid sailor has all the ingredients to hand: knowledge of weather, tides, a sound vessel, good charts and pilots, a big pinch of prudence… then the memories they conjure up will be endearing and spellbinding.

As the wind howls on and the lowlands flood, mainlanders and islanders alike are breathing a sigh of relief as the crazy rushings of summer ease and depart. All over the highlands they sit at laptops on tables, eyes cast over bank statements hopeful that visitors left enough gold to get to the start of the rainbow next year. For the sailors, plans are made, sailmakers and engineers contracted, yachts lifted or taken south, maintenance schedules are mapped out. And for a few hardy souls, tides are consulted, full moonlit nights notched on wall calendars…winter is here. It’s our turn to use the portal key… and dodge the gales.